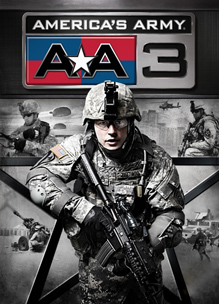 While the page was removed from the Steam Store search, America’s Army 3 remains accessible and can still be downloaded as of May 2022. After the shutdown of America’s Army: Proving Grounds on May 5th, 2022, the AmericasArmy.com homepage was updated with the following notice:

While official support and servers have been shut down, the legacy titles America’s Army 3 and America’s Army: Proving Grounds are still available to download above. We look forward to what the future could hold for AA, and encourage you to stay tuned for future announcements on the series.

Since at least 2010 the series’ dedicated community has also offered ASSIST, a client and servers to continue playing older versions of the game.

Download AA3 Today and Become a Member of the elite America’s Army Team!

Built on Unreal Engine 3, AA3 delivers stunningly realistic characters, environments, lighting effects, animations, and team-based experiences. In the game where Every Detail Counts™, players are bound by Rules of Engagement (ROE) and gain experience as you navigate challenges in team-based, multiplayer, force-on-force operations. With 15 different map/mission combinations and exclusive advanced training that allows you to unlock new abilities and customize your gear, you’ll experience Soldiering in the U.S. Army like never before.

When you play AA3 on Steam, you’ll earn Steam Achievements, ranking up among your friends as you earn distinguished status, badges, medals and ribbons. With AA3 on Steam, you can also save your keyboard bindings to the Steam Cloud – just login to your Steam account and fire up AA3 on any PC to utilize your custom settings.