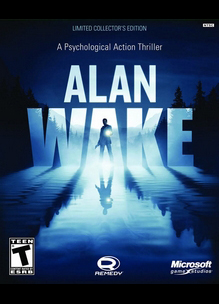 Alan Wake was relisted on October 25th, 2018 on Steam and GOG.com. On the same day Remedy announced via Twitter that the game had returned and would be re-emerging on Xbox 360 “very soon”.

“Big thanks to our partner and Alan Wake’s publishers @Microsoft who were able to renegotiate the rights to the licensed music in Alan Wake, so that the game can be sold again.”

In subsequent replies on Twitter, Remedy confirmed that all of the game’s licensed music was kept intact. Although promised to be relisted “soon”, the Xbox 360 (and Xbox One backward compatible) version of the game did not return until the week of December 15th, 2019. The original delisting information follows.

Alan Wake was delisted from Steam and GOG.com on May 16th, 2017 after the expiration of a music license. Lauri Haavisto and Thomas Puha, Remedy’s head of community and head of communications respectively, both commented on the delisting ahead of the May 16th deadline.

In a post to Remedy’s forums on May 12th, 2017, Haavisto bluntly explained that “the music licenses for Alan Wake are expiring. As a result, the game is going to be taken out of physical and digital retail. Alan Wake’s American Nightmare will stay in retail. We’re having a 90% off ‘Sunset Sale’ for Alan Wake on Steam 13.–15.5.2017”.

In a comment to Polygon, Puha added “Microsoft and Remedy are looking into renegotiating the music licenses, but there’s nothing more to comment on that for now. Obviously having to remove the game from stores is rather unfortunate. So, we figured, let’s discount the game heavily and those who have not bought Alan Wake yet, here’s your chance to grab it on Steam.”

The licensed music was largely used as the backing tracks for the “episode” recaps in the game and featured several major artists including David Bowie, Roy Orbison, and Depeche Mode. Removing the music would not only be a technical hurdle, it would also leave these memorable scenes feeling flat. On the other hand, the cost of renegotiating the licenses would likely outweigh the profits from having the game back on sale seven years after its release.

Alan Wake was first released May 14th, 2010 and delisted May 16th, 2017. This suggests a 7-year licensing deal on the music or perhaps a more typical 3-year license with an extension that would have occurred around 2013. Interestingly, Alan Wake was featured in a Humble Weekly Bundle on May 22nd, 2013. The results of this sale may have helped secure or cover an unannounced licensing renewal.

IN DARKNESS, FIGHT WITH LIGHT. From Remedy, the masters of cinematic action, comes a 3rd person action game filled with overwhelming odds and desperate near escapes. When the wife of the best-selling writer Alan Wake disappears on their vacation, his search turns up pages from a thriller he doesn’t even remember writing. A dark presence stalks the small town of Bright Falls, pushing Wake to the brink of sanity in his fight to unravel the mystery and save his love. With the body of an action game and the mind of a psychological thriller, Alan Wake is a pulse-pounding thrill ride.