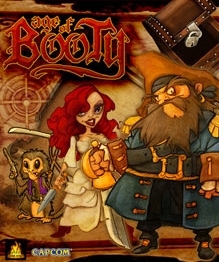 Age of Booty was delisted from Steam in late September 2015. The PlayStation 3 version was presumably removed around this time as well. In May of 2014 the game’s online multiplayer modes were removed when the GameSpy services were shut down. A post by Minish Capcom on the Capcom-Unity forums on May 12th, 2014 announced the news alongside other affected titles:

Age of Booty (All versions): Unfortunately there are no plans to update or migrate this title to a new service. It’s been a great ride (2008/09-2014) and we thank everyone who sailed these seas. You can of course still play the game’s single-player mode.

At this point the game was still available to purchase on Steam but its page displayed the note, “Due to the GameSpy service shutdown, the Age of Booty currently only supports single player campaign mode”. Then, on August 24th, 2015, a post was made to the game’s Steam Community forums to announce that Age of Booty was being removed from sale entirely:

“Hello, all. As we previously announced over on Capcom Unity[www.capcom-unity.com], unfortunately there are no plans to update or migrate Age of Booty to a new matchmaking system following the shutdown of the Gamespy service. For those who already own the game, as has been the case, the single player campaign will still be accessible since that portion is unaffected by the shutdown. However, after some consideration, we have determined that since any new users will not be getting the full game experience, we have decided to remove Age of Booty for purchase from Steam in 30 days [09/23/15].”

“Be a pirate! Fight for fortune and infamy in Certain Affinity and Capcom’s game of strategy and explosive action that’s fun for all ages. Outfit your ship and raise havoc on shimmering seas in lush 3D landscapes. Hone your skills in solo-play missions and fight with friends in up to 4-player split-screen mode – take on computer opponents or play online with up to 8 players [online] or System Link. Explore 25 multiplayer maps, free downloadable maps, and unleash your inner cartographer with a robust, easy-to-use map editor. Share your creations for even more multiplayer mayhem, then plunder your way to victory!“