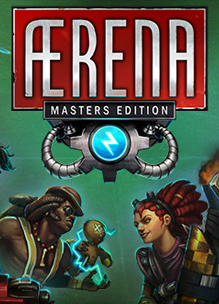 Cliffhanger Productions announced on March 24th, 2016 on Steam that Aerena would be removed from sale and servers shut down by the end of April 2016. The full announcement follows:

with a grave heart and much regret, we are hereby announcing the sunsetting of AErena. We dearly love the game and we have invested a lot of time (and budget) into making it. We still think it is a unique tactical title and setting and we know some of you think the same. However as a player vs player online title, AErena needs a critical mass of players to work and this has not been achieved in the previous months and this is not going to change in the future, as we cannot afford marketing or updating the title to keep it alive.

The cost for keeping the servers active and supporting the game by far exceed the returns and we have basically paid to keep it running out of love and dedication to our game and our players. Being a very small studio however, we cannot afford to do so any more.

As such we will now start a sunsetting period for AErena, keeping the game running but taking it off the store some time in the next two weeks. We will keep the servers running until end of April at which time AErena will cease to exist. We dearly wish there was any other solution, but we have exhausted all alternative means of keeping it alive.

We are very sad to see it go, but we had a blast while it lasted. Thanks to all the players who kept it alive for so long.

Assemble your team of champions and outsmart your opponents in tactical turn based combat to become the greatest Æther Master of all! Create your own strategy and use powerful Æther shells turn the tide of battle in a quick 10 minute match! Level up to earn coin and unlock new ships and shells in the ultimate cross-platform strategy game.

TACTICAL TURN BASED COMBAT
Fight against thousands of players or face a challenging campaign to become the Æther Master and prove your superior tactics!

BUILD YOUR OWN STRATEGY
Choose your champions, gain powers with new Æther shells and pick the best ship from thousands of possible combinations.

Thanks to matrixrunner for submitting this game to the site