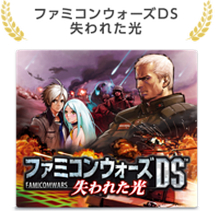 Advance Wars: Days of Ruin (JP: Famicom Wars DS Ushinawareta Hikari) was delisted in March of 2016 when My Nintendo replaced Club Nintendo as the publisher’s worldwide player reward service. Like WarioWare: Touched!, Advance Wars on the 3DS was a unique release. It was one of only two DS titles that were offered as a download on the Nintendo 3DS and was stored in the DSiWare portion of the system storage rather than as a standard eShop download.

No other digital versions of the game have been released and this Japanese-language version is considered Extinct as it is not readily available on any other medium.

“Advance Wars has been reborn. Set amid a world in chaos and boasting new characters and settings, the latest game in the series features a gritty look, an engaging storyline and online battles and map trading. It’s the most stunning Advance Wars ever.“

Footage above is from a hacked version of the ROM of the Western release of Advance Wars: Days of Ruin. I couldn’t find a single video of the Japanese 3DS download.

Thanks to Aipompous for submitting this game to the site