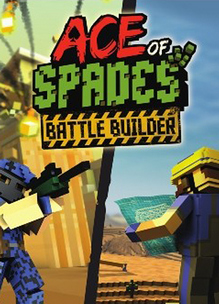 Jagex announced on April 3rd, 2018 that Ace of Spades (rebranded as Ace of Spades: Battle Builder in 2013) had been removed from sale and that the servers would remain online for existing players until July 3rd, 2018. The announcement follows:

It’s been a while since our last communication, and we wanted to update you on the status of Ace of Spades.

We know that some of you have experienced issues running the game and have been unable to play Ace of Spades in the way that it was intended. Regrettably, we’re not able to resolve the underlying technical issues and that means the time has come to wave the game off into the sunset.

Therefore, Ace of Spades will be removed from sale on Steam on 3rd of April 2018. The servers will remain live for three months following that date, but after 3rd of July 2018, it will no longer be possible to play the game.

Closing the service is not a decision we have made lightly, and we apologise to those of you who remain active members of the community. Thank you for your support and enthusiasm for Ace of Spades.

However, following player response the shutdown was postponed as Jagex investigated retooling the game and releasing it to the community as open source software. Unfortunately, after months of work the decision was ultimately made to shut down the game. The follow-up announcement was posted on March 1st, 2019:

We wanted to let you know that we are sunsetting Ace of Spades, this process – which began last year, will complete on Wednesday 6th March at 12pm GMT when the servers will finally be retired.

Just under a year ago, we initially announced that Ace of Spades would be closing its servers in July 2018. In response to your suggestions, we then paused the plan to investigate whether the game could go opensource.

After giving the codebase a full review and examining the detail of making the game available opensource we’ve concluded that, due to potential technical, legal and licensing implications, its not possible to do this and thus we will close the servers on Wednesday 6th March at 12pm GMT.

We want to thank you all for playing the game, and for your ongoing enthusiasm and support along the way.

While the game’s code was never officially released, fans have recreated the experience through open source clients (OpenSpades) and private servers (BuildandShoot.com) for various versions of the game.

Say hello to the creative shooter. Ace of Spades: Battle Builder is the first-person shooter that lets you create your battleground, destroy it, then create it again. Up to 32 players choose from seven unique classes and jump into team-based, multiplayer mayhem across an endlessly evolving battlefield, to construct, destruct and take out the opposition.