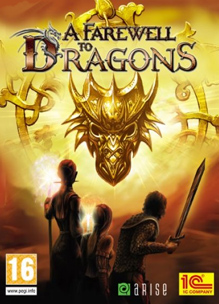 A Farewell to Dragons was most likely delisted on Steam between April and July of 2012. Although the game had many unresolved bugs and reportedly caused frequent crashes, the delisting seems to be related to 1C Company’s license of the Russian fantasy novel on which the game is based, “Ne Vremya Dlya Drakonov” (translated as “Not the Time for Dragons”) by Sergey Lukyanenko and Nick Perumov. When asked who holds the game’s license on Twitter in 2019 the company’s official account responded simply “unfortunately not us anymore”.

A Farewell to Dragons is a classic Action/RPG that takes place in the universe based on the fantasy book written by famous Russian writers Sergey Lukyanenko and Nikolay Perumov. Fateful times began in the Middle World, from now on its destiny depends on Victor, the main character of the game. The hero will discover the magic of four elements, master the power and fulfill his destiny. Leaded by young sorceress Telle the hero has to grasp in intrigues, experience himself and accept his fate. Will he become Dragon the Created or the Dragon Slayer?