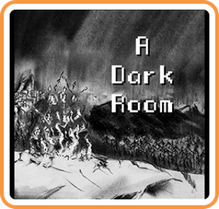 A Dark Room returned to the Nintendo Switch eShop on September 6th, 2019. Developer Amir Rajan confirmed the news in a reply on Twitter stating:

– Not banned by Nintendo.
– A Dark Room is back up for sale.
– Now working on the pre-sequel.
– And the easter egg coming back as a full-blown DLC.

A Dark Room was delisted from the Nintendo Switch eShop on April 26th, 2019. Potentially through social media and news posts, Nintendo was made aware that the game included an easter egg that, when a USB keyboard was plugged in and the ‘~’ key pressed, a Ruby interpreter was loaded. Initial online banter, including that from developer Amirali Rajan, implied a much more extensive toolset than what was actually included. Nintendo removed the game from sale over concerns of software vulnerabilities.

Dear Ruby devs and game devs. I have a crazy announcement I want to share. Please boost. Last week I released A Dark Room to the Nintendo Switch. Within the game, I also shipped a Ruby interpreter and a code editor as an Easter Egg.

Talking to Eurogamer after the delisting, Rajan explained “I deeply regret how this has blown up. A simple toy sandboxed environment has been framed as this massive exploit. And of course it’s the community that exploits these things that pushed it up to that level. I’m partly to blame with my sensationalised media posts.”

A Dark Room remains available on the web in its original form from developer Doublespeak Games, and as ports on iOS and Android from Rajan.

“A Dark Room is an innovative text-based adventure that harkens back to the magic of Zork, adding a modern spin on a classic genre and time in gaming.

It challenges the player’s perceptions, actions and imagination. Visually clean, A Dark Room presents text and cues with limited visual flourishes, but the experience that takes shape is full of depth and environmental storytelling. Audio is also important, portraying a dark world that the player can only imagine.

It is a game that draws players in, allowing them to perceive the intriguing world in their own way. What starts as a dark room with limited interactive options evolves into a complex story and resource management challenge.

Adapted especially for the platform, you can play with physical controls or the touch screen; exclusive to this version of the game is an enhanced user interface and local co-op play.

A Dark Room is an experience, and a story, unlike any other.“