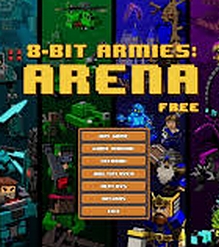 8-Bit Armies: Arena was delisted from Steam on March 13th, 2018. In response to questions asking about the game’s availability on the Steam Community page, developer PG_Ren replied with the following explanation:

8-Bit Armies: Arena was pulled because it mirrored the same game content that was already available in our other 8-Bit games.

Essentially after researching the data, we felt it was not contributing significantly (practically at all) to the overall user base so we decided to pull it.

However, as long as you already own Arena you can still play with any 8bit players since all 8 bit games (Armies, Hordes, and Invaders) play against each other, there should still be people to play.

If you find the need to want to chat about it, you could probably find one of us here on our Official 8Bit Discord: https://discord.gg/ygGFZxz

“8-Bit Armies: Arena is the Multiplayer-Only version of the 8-Bit Games series (8-Bit Armies, 8-Bit Hordes, 8-Bit Invaders) where you compete online using all of the armies and multiplayer maps from the original series of games.“