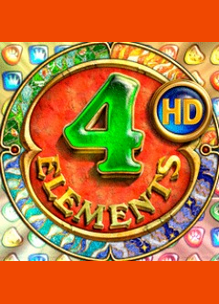 As so many developers and publishers are involved across multiple releases, it seems likely that the title and gameplay were licensed from whoever owns the 4 Elements property. The earliest release we identified was from 2008 by Playrix Entertainment on PC and Steam but their versions have also been delisted. However, the trial download of the game remains available directly from Playrix’s website.

“Beyond endless seas, an ancient kingdom is in trouble. A land once full of life has become a lifeless desert. Restore the power of the magic altars so that peace and prosperity may return. An adorable fairy will aid you on a perilous journey while you will fight your way to the harmony.

The mysterious world of 4 Elements HD gives you a unique Match-3 gameplay experience designed exclusively for PlayStation®3 system players. Make chains of gems – as long as you can – and drive the energy to the magic altars. Complete levels quickly to raise your name to the top of the global scoreboards! You can also take advantage of the amazing PlayStation®Move motion controller option! Build and upgrade your castle, learn books of magic and enjoy brilliant Full HD resolution with 4 Elements HD!“