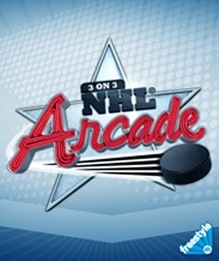 3 on 3 NHL Arcade was delisted on Xbox 360 and PlayStation 3 in most territories between December 17th, 2015 and January 16th, 2016. It remained available to download on PlayStation 3 exclusively from the PlayStation Store in Singapore but was later removed.

3 on 3 NHL Arcade was likely delisted due to expired licensing through the NHL. The game’s online features were later retired on March 10th, 2020.

“EA SPORTS Freestyle™ welcomes you to the fast paced world of arcade hockey. From the same team that brought you NHL® 09 comes a 3 on 3 experience that throws conventional hockey, and its rules, out the window. Choose from the NHL’s top players and bring them into this no rules hockey game where big hits rule the day.

The Trial Mode gives you a taste of the greatness that is 3 on 3 NHL® Arcade, to get a full bite, download the full version today. The full version offers 8 Powerups, Online Game modes, Leaderboards and Achievements.“