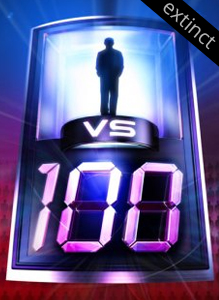 1 vs 100 on Xbox 360 was a live multiplayer game show based on the TV program of the same name. After a beta period and a successful first season in 2009 Microsoft greenlit a second season that ended on February 15th, 2010. In a final blog post on July 15th, 2010, dev team member Trilobiting confirmed the game was finished.

“As you’ve probably seen by now, we are no longer developing 1 vs. 100 for Xbox LIVE. We’re sorry to have kept you waiting in suspense before having to deliver this kind of news. We fully understand how some of you may be upset about the announcement.   We hope you understand that it wasn’t an easy decision to make and there was a great deal of deliberation.

We hope to focus on the fun times playing 1 vs 100 as we look back on the two seasons and the enormous amount of time and effort that the development teams and the fans poured into the game. For now we say goodnight to 1 vs 100.  You were truly part of something new, exciting, and unprecedented, and we thank you for all of your support along the way.”

In an LA Times article leading up to the game’s first season Manuel Bronstein, director of 1 vs 100, reveals some of the revenue structure behind the game. While plans were to charge players for the game Microsoft eventually decided to rely solely on advertising sponsors for income. For the first season both Honda and Sprint paid around $1 million each for branding in the game’s 3D environment and frequent commercial spots between gameplay.

The format of the game allowed for only 7-8 minutes of commercials in a 2-hour episode. In comparison to network television at the time the entire 13-week season of 1 vs 100 would be far less profitable than a single hour of network programming. Lack of advertiser interest and the cost of managing the game’s unique server infrastructure most likely resulted in its cancellation after season two despite its increasing popularity.

1 vs 100 was a massively multiplayer online trivia game show featuring Xbox 360 Avatars and available to Xbox Live Gold members. Two versions were run during each 13-week season: Live and Extended Play. 1 vs 100 Live aired every Tuesday and Friday in a two-hour episode. Live host, Chris Cashman (in the US), would emcee the game as The One answered trivia questions while trying to “knock out” The Mob. Members of The Crowd could play along to earn experience levels and entries in sweepstakes. The One and The Mob had the chance to win up to 10,000 Microsoft Points ($125) and a selection of games.

Extended Play episodes initially ran one hour each and were played back to back in a two-hour block but in Season Two were chopped up into 30-minute themed episodes. There is no One and no Crowd, all players were in a single, massive Mob playing against one another. Answering trivia questions correctly increased players’ streak bonuses, awarded a “safety” that could protect them from an incorrect answer, and boosted their experience levels. Xbox Achievements, badges, titles and Avatar dance moves were all used to encourage players to participate in every episode.