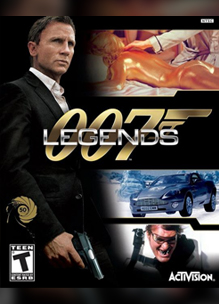 In early January of 2013 Activision removed all of its digital James Bond titles from sale with no advance notice. These included 007: Quantum of Solace, GoldenEye 007: Reloaded, James Bond 007: Blood Stone, and 007 Legends. Activision’s license of the James Bond property from MGM and EON was established in 2006 and slated to run through 2014. However, given the broad delistings in early 2013 it has been speculated that their license was revoked rather than allowing it to run to term.

As with the feature films, 007 Legends equips players with state-of-the-art spy gadgets, an arsenal of weapons, including Bond’s signature Walther PPK, and sleek vehicles as they jet off to exotic locations and utilize Bond’s quick wits, class and style to take down notorious villains and their brutal henchmen, perform impressive stunts, and of course… mingle with gorgeous Bond women.“

Thanks to X70 for submitting this game to the site