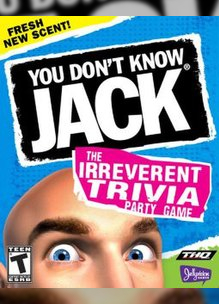 You Don’t Know Jack was delisted from Steam no later than June 10, 2014. This was the day that a Steam Community post was made questioning the game’s availability. The Xbox 360 version was last confirmed available on February 12, 2014, and was removed from the Xbox Marketplace by June 5, 2014, according to a post on TrueAchievements.com.

The game was most likely delisted due to an expired publishing agreement between Jellyvision and Nordic Games. Jellyvision Games, now rebranded as Jackbox Games, would go on to publish The Jackbox Party Pack just four months later, with a newer version of You Don’t Know Jack included.

YOU DON’T KNOW JACK® – the trivia game your mother warned you about – would like invite you to have your pants pulled over your brain (a.k.a. “a head wedgie”). Unless you think you know a thing or two, that is! YDKJ is the hilarious quiz show party game where high culture and pop culture collide like a donkey on a unicycle crashing into a bigger donkey on another unicycle. Play alone or with friends – if you have them – and match wits with your acerbic (that means “single and desperate”) host, Cookie Masterson. Oh, and keep an eye out for the Wrong Answer of the Game! Pick it, instead of the correct answer, and win fabulous fake cash and prizes… like a donkey on a unicycle. It’s trivia. It’s all-new. It’s unscented. It’s YOU DON’T KNOW JACK®!