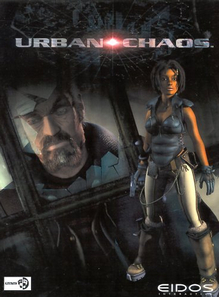 Urban Chaos was relisted on Steam on August 8th, 2020. According to the Giant Bomb entry for the game’s new publisher, My Little Planet Ltd, one of the original Mucky Foot founders (presumed to be Guy Simmons) has attained the rights to both Startopia and Urban Chaos and returned them to sale on Steam. Both titles next returned to sale on GOG.com on January 19th, 2021. Our original delisting details follow.

Urban Chaos was delisted from Steam and GOG.com on October 2nd, 2019. The delisting was caused by expired licensing although the source is uncertain. Square Enix had already purchased Eidos, the game’s original publisher, by the time it was released on Steam and GOG.com in 2012/2013. The developer, Mucky Foot Productions, had also shut down by 2003.

“Due to expiring licensing rights, Urban Chaos will be delisted from our catalog today (Wednesday), October 2, 6pm UTC. For everyone who purchased it prior to delisting, the game will remain in their GOG library.”
– GOG.com announcement

Reports of performance issues on the game’s Steam Community forums seemed to increase after 2018. Lack of a team to support the title on newer hardware may also have been a cause behind the game’s delisting. As of October 2019 Steam keys were still available from Newegg.com while physical versions remain available on PlayStation, Dreamcast, and PC. In 2017 the game’s source code was also released to the public through GitHub.

“Urban Chaos throws you into the heart of a modern urban jungle at the turn of the millenium. To succeed you’ll need a lethal combination of stealth, physical agility and martial art skills as you interact with the city around you.

Complete freedom to explore every areas is granted and this freedom extends to gameplay – the future is in your hands as you are drawn into an underlying plot featuring a mysterious cult who are intent on evil at this unpredictable and potentially menacing millenium period.“