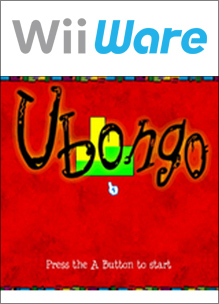 Ubongo was delisted on Nintendo Wii no later than August 2014, according to a board post on GameFAQs. The game was likely removed from the DSi Shop Channel at around the same time.

Ubongo was most likely delisted due to expired licensing of the Ubongo board game to Korner Entertainment. A newer, officially licensed version of Ubongo published by USM was released on Nintendo Switch and iOS on April 8, 2020.

Get ready for the Ubongo experience! Solve as many puzzles as you can and you’ll be the winner.

What’s Ubongo? Its mechanics is very simple. Just solve as many puzzles as you can and get gems of the same colour. At the end of the established time, the player who has more gems will be the winner.

The original board game is a blockbuster in many countries; where its popularity has taken Ubongo to the highest position in the lists of sales. Why? Because, under a seemingly simple premise, an extremely addictive game hides…You always want to play one more time!

History Mode
In this mode you’ll take the rol of Kanu and should defeat the followers of evil Rifictus winning them in Ubongo’s games. There are locations placed in the desert, in jungles, in mountains covered with snow… If you win the games, you will be advancing in the game up to reaching the final goal: the clash with Rifictus for the recovery of the last gem that will bring the salvation to Kanus’ people.

Time Attack
In this mode you should focus your efforts on the clock… as the key is to get a high number of gems within a time limit! So here it will be important to have a good strategy in order to get the gems as soon as possible.