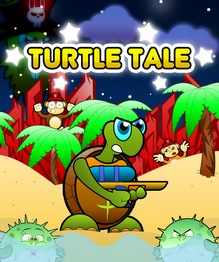 One of those issues could have been Saturnine’s dissatisfaction with Nintendo’s approval or support processes. It could also have been that Saturnine Games no longer met Nintendo’s criteria to maintain their developer or publisher status. As of this writing, no further explanation has been given and all three titles are considered Extinct.

“Turtle Island has been invaded by Captain O’Haire and his gang of pirates. It’s up to Shelldon to defeat Captain O’Haire and reclaim the island. Armed with his trusty water gun, Shelldon jumps and shoots his way across the island in classic 2D platforming action. Colorful 2D graphics give an amazing sense of depth with stereoscopic 3D on the Nintendo 3DS.”