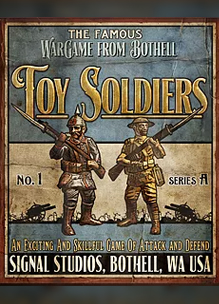 Toy Soldiers is an action-packed strategy-based game in which players command antique WWI toy soldiers vying for control of the trench-filled battlefields of Europe. Deploy an exciting arsenal such as tanks, cavalry, biplanes, and flamethrowers in vintage WWI toy dioramas. Developed by Signal Studios, Toy Soldiers allows you to take control of individual units or control the entire battlefield from a strategic view. Integrating multiple game genres and world-class visuals, Toy Soldiers is a unique and action-packed entertainment experience!

Command your Toy Soldiers in epic, action-packed battles. Position your defenses and take direct control of your artillery to bomb the enemy positions, pilot your bi-plane against the enemy trench, or maneuver your tanks across No-Man’s Land and lead your Toy Soldiers to victory!