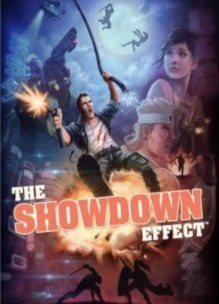 The Showdown Effect was delisted from Steam on August 14, 2018. The game was delisted due to unsustainable operating costs and low player counts, with the game having less than 100 concurrent players by November 2013. When asked for comment on The Showdown Effect’s delisting, Christian Arvidsson of Paradox Support stated:

Good morning,
The Showdown Effect will not be making a return as it is sadly not a feasible product to keep active. It was costing us more than it generated and as a business that’s not really good. The game was also not developed by us and we are no longer cooperating with them.

I understand you’d like to see it return and you are not alone, I really liked that game, but I can say with 99% certainty that it won’t happen.
Kind regards,
Christian

The Showdown Effect is a 2.5D multiplayer action game inspired by 80’s and 90’s action movies. Champions from throughout time fight to death for fun, for glory and for awesome.

No explosion is too loud and no bullet dodge is impossible. Impale your friend with a broomstick and tell them to “Stick around” as you jetpack off to the next enemy.
The Showdown Effect also uses integrated streaming technology to live stream directly to Twitch.tv, without the need for third party software.