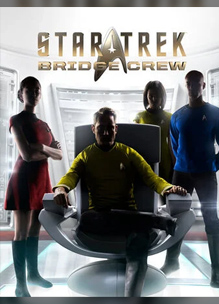 Star Trek: Bridge Crew was relisted on Steam on March 16th, 2022 and had also returned to the Ubisoft Store for Oculus and Vive. The PlayStation 4 and Oculus Store versions were then relisted by April 12th, 2022. None of the release details or copyrights changed so it seems the licensing deal between Ubisoft and Paramount was simply renewed. Thanks to Linoano for pointing out the game’s return.

Although unconfirmed, the delisting seems to have been caused by expired licensing of the Star Trek properties from Paramount Pictures and CBS Studios. However, the game has gone without much support since a 2018 “Next Generation” expansion so compatibility issues may also have factored into its removal.

Star Trek™: Bridge Crew will immerse you in the Star Trek universe (VR compatible). The game puts you and your friends in the heart of the U.S.S. Aegis.

Your mission: explore a largely uncharted sector of space known as The Trench, in hopes of locating a suitable new home world for the decimated Vulcan populace. The Klingon Empire is also active in the region, and their purpose is a threat to the Federation’s plans.

Make strategic decisions and coordinate actions with your crew to complete the mission.

In co-op, you can form a crew of four players to serve in the roles of Captain, Helm, Tactical and Engineer. In addition to a dynamic storyline, the game features an “Ongoing Missions” mode, procedurally generating missions for countless hours of Solo and Co-op adventure.

In Star Trek™: Bridge Crew, communication, trust, and close crew coordination are the keys to victory.

A permanent internet connection is required in order to play the game.