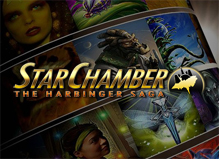 Star Chamber: The Harbinger Saga was shut down on March 29th, 2012. The team announced the shutdown of this and several SOE titles one month earlier:

“Star Chamber was an online collectible card game (CCG) first released as just “Star Chamber” in 2003 by Nayantara Studios. It was free to download and play, with additional cards available for purchase. There was one base set and five expansion sets released for Star Chamber.

One of the game’s primary distinctions was that it combined traditional CCG elements (card collecting and trading, deck building, the use of cards in-game, etc.) with a board wargame-style map and unit production based on locations on that map, in some ways similar to the classic Master of Orion series. There were 43 unique maps, with random elements incorporated into some of those maps. The titular Star Chamber is a location at which voting session between players’ citizens took place every sixth turn. Players voted for the Power Play, Alien Support, and Peacekeepers (see Voting below).“ – Wikipedia