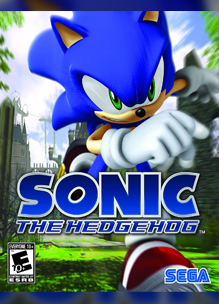 Sonic the Hedgehog (2006) was unexpectedly relisted shortly after the delisting of several older Sonic titles on May 20th, 2022. We first noticed the game’s return to the Xbox 360 marketplace on May 24th and it has returned to all major territories.

Sonic the Hedgehog (2006) was delisted on Xbox 360 in October of 2010 in a move by Sega to “clear the air” ahead of the release of Sonic Colors, Sonic Free Riders, and Sonic the Hedgehog 4. Jurgen Post, Sega’s SVP of the EMEA announced at the time that “any Sonic game with an average Metacritic has been de-listed. We have to do this and increase the value of the brand. This will be very important when more big Sonic releases arrive in the future”.

He continued, “we could make a lot of money on back-catalogue Sonic titles, but let’s keep the number of Sonic games available under control. Otherwise you can have cannibalisation. If there are ten Sonic games on the shelves, with people seeing Sonic Rush DS or Sonic Rush Adventure, this may not help our overall strategy.”

In this case, delisted meant both digital and physical with several Sonic releases reportedly becoming difficult to find at retail around this time. These included Sonic and the Secret Rings, Sonic and the Black Knight, Sonic Unleashed, Sonic Riders: Zero Gravity, and potentially other older releases. Only a few Sonic titles released on consoles were available digitally up to this point and we have not yet found evidence that any others were removed from sale alongside Sonic 2006.

When video game icon Sonic The Hedgehog debuted on the SEGA Genesis in 1991, he shook up the action-platform genre with his signature speed and rebellious attitude. More than 44 million units later, Sonic celebrates his 15th anniversary and blazes his way onto the next generation consoles for an epic adventure designed to deliver the most intense sensation of speed experienced to date.

The game is set in So Leanna, the beautiful city of water. In his first adventure set in the human world, Sonic meets a beautiful princess named Elise, whom he quickly befriends; but Princess Elise is abducted by none other than the calculating Dr. Egg man who is working under dark and sinister motives to destroy this special kingdom of hers. In order to restore safety and serenity, Sonic must maneuver his way through a series of adventures and challenges where he will encounter and interact with a bevy of allies and enemies, and ultimately go head to head against the menacing doctor to thwart his malicious plans.

Along the way, Sonic encounters a mysterious character named Silver. Blocking him with unique supernatural powers, even the Blue dude with ‘tude will find it difficult to out-maneuver the enigmatic Silver! As Sonic speeds through the huge kingdom, the mysteries unravel. Sonic The Hedgehog melds top-tier animation production values with next generation art, physics and game design to create the most intense, high velocity Sonic adventure yet! Featuring interactive 3D environments, a large cast of new and returning characters, and a blistering sense of speed, get ready for the reinvention of Sonic The Hedgehog!

Thanks to SamSkeledoot for submitting this game to the site