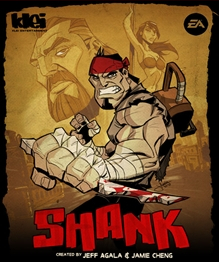 Shank was delisted on PlayStation 3 and Xbox 360 during the month of July 2018 according to TrueAchievements.com’s delisting roundup. Community admin, JanH, posted a reply on Klei’s forums on August 14th, 2018 explaining that “Shank was published by EA and the contract for that recently expired / ended and was not renewed. If anything changes, we will be sure to let everyone know.” Shank remains available on Steam where Klei took over as publisher from EA in May of 2013.

“Shank is the cult-classic revival of the sidescrolling beat-em-up. Play as Shank in an over-the-top grindhouse game, packed to the rim with enemies, bosses, combos, and more by the award-winning team at Klei Entertainment. The 2D sidescroller beat-em-up is finally on Steamplay, now with improved controls and tuning updates based on popular feedback!

Shank will have you shooting and slashing your way through hordes of enemies in a stylized slaughter fest. Embark on a brutal path of blood soaked revenge as Shank battles his way through the criminal underground in his quest for retribution. Boasting fast-paced bloody action, silky smooth controls and a signature pulpy grindhouse art style, Shank is a must-play for action fans.”