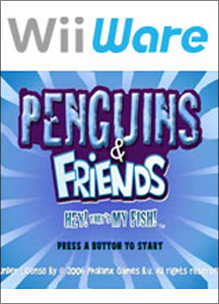 Penguins & Friends: Hey! That’s My Fish! was delisted from the Nintendo Wii Shop Channel in North America on March 30, 2012, and in Europe on May 15, 2012. The earliest confirmation of Penguins & Friends delisting was a revision in the game’s Wikipedia page on April 2, 2012.

The game was most likely delisted due to the expired licensing of the “Hey, That’s My Fish!” board game to Gammick Entertainment.

You can become the fishing king! Catch all the fish you can before someone steals them from you!

You can become the fishing king! The penguins are hungry and need your help to feed themselves. Catch all the fish you can before someone steals them from you! Strategy is fundamental in this exciting game. Keep moving ahead of the other penguins so that you don’t get trapped, and try to get to the ice floes that hold more fish.

Between one and four players can play “Penguins & Friends” at the same time—providing they can handle the polar cold. How to play? The board is made up of ice blocks that have a set number of fish (1, 2, or 3) under them. The ice blocks are hexagonal and form a structure like a beehive. The starting position of the ice blocks can change, creating different game boards. Each player has a set number of penguins (according to the total number of players in the game and the size of the board) that serve as markers.