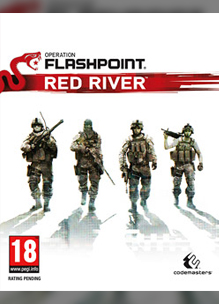 Operation Flashpoint: Red River was delisted on Steam on October 23rd, 2018 when its price was set to $0.00. Microsoft confirmed in 2016 that the Xbox 360 version of the game was only available digitally in Japan. Archive.org captures show that that version of the game was available to buy in September of 2015 but no later captures exist. We confirmed that the Japanese release was no longer available to download on January 29th, 2021.

As far as we can confirm the game was never available to buy on the PlayStation Store, but in 2015 it was added to the streaming PlayStation Now service. Red River was also added to Xbox One backward compatibility in 2016 and though it was promised to be available to buy from the Microsoft Store, reports indicate that it was never released. The game’s sole piece of downloadable content, “Valley of Death”, was delisted on PlayStation 3 in most territories by November of 2018 but remains available in South Korea as of this writing. The same DLC was available until early January of 2021 on Xbox 360.

As early as 2012 Codemasters publicly stated that they were focusing only on racing titles and had no plans to move forward with the Flashpoint series. Customer support reiterated this point in September of 2020 when reader Wakayama_PT contacted Codemasters about the delisting, receiving the following response:

Thank you for submitting your recent request to Codemasters Customer Services concerning Operation Flashpoint: Red River. Due to the age of the game it is no longer available unfortunately. We have no plans to re-release any Operation Flashpoint games.

As many of Codemasters non-racing titles remain available to download, including Red River‘s predecessor Operation Flashpoint: Dragon Rising, it would seem that this delisting was related to licensed content. The likely suspect is the game’s soundtrack which includes songs from Bullet For My Valentine, Disturbed, Megadeth, N.E.R.D., Pantera, Saliva, and more. Red River also features licensed vehicles and consumer products.

Stand together with the US Marines in Operation Flashpoint: Red River, the ultimate tactical infantry shooter.

You’ll play as one of four distinct and complimentary classes in a Marine Fireteam – Grenadier, Scout, Rifleman and Automatic Rifleman – as you embark on an epic campaign. Take on huge sandbox battlefields in the new setting of Tajikistan, a geopolitical hotspot bordered by Afghanistan and China. Face the unpredictable threat of all-new insurgent enemies and the might of the world’s largest Army, the Chinese PLA. Use authentic tactics on your own initiative in solo or in four player drop-in, drop-out co-op campaign.