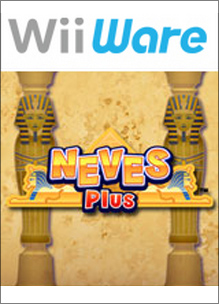 NEVES Plus was delisted on Nintendo Wii in North America between July 2010 and August 2011, following the closure of Yuke’s Company of America. With no company remaining to support the game, it was removed from sale. NEVES Plus remained available in Europe until June 30th, 2012, where it was published by Abylight. The game was likely removed in Europe due to an expired publishing agreement between Abylight and Yuke’s. The game’s availability in Japan is uncertain but would have been delisted by January 30th, 2019 when Nintendo shut down the Wii Shop Channel.

Try your hand at the latest addictive puzzle craze to come out of Japan!

Try your hand at the newest addicting puzzle craze to come out of Japan—NEVES Plus! Enhanced for WiiWare, NEVES Plus not only retains all the simple, mind-bending tangram-based game play from the original Nintendo DS version but includes all new multiplayer modes wrapped up in an Egyptian theme. This time, you and up to three others can work together to move, rotate, and flip the seven Lucky stones into each of the 500+ silhouette puzzles. Or, you can challenge one another in any of the new multiplayer modes such as Versus, Speed, Lucky Number, and Party Mode! Whether you play every mode by yourself or with friends, NEVES Plus is set to charm you with its deceptively harder-than-they-look silhouette puzzles.