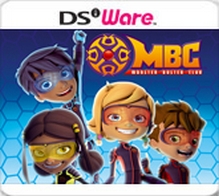 Monster Buster Club was delisted from the Nintendo eShop for DSi and 3DS no earlier than January 19th, 2013. This is the last date that Archive.org captures show the game was available to buy. The delisting was likely due to expired licensing of the Monster Buster Club IP from Marathon Media (MARATHON-JETIX EUROPE-MUSTERY).

Earth is about to be invaded by evil aliens and their first stop is Singletown. As long as they’re around to save the day, the members of the Monster Buster Club refuse to let this happen! Join Cathy, Danny, Sam and Chris on an exciting adventure based on the hit animated TV series Monster Buster Club and stop these troublemakers from taking over. As you search for the villainous Nosidda, you and the MBC team will battle aliens outside the school, race your car through the streets of Singletown, solve puzzles, engage in air battles, and even visit outer space!