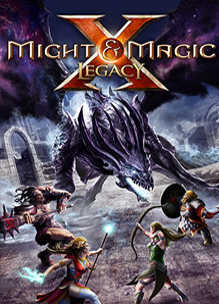 Ubisoft announced on October 20, 2021 that all authentication-related issues regarding Might & Magic X were resolved, and that the game would return to sale. The original delisting details follow.

First announced on April 6th, 2021, the shutdown of online services for several Ubisoft titles including Might & Magic X – Legacy was pushed back to June 1st. After the servers were shut down the game’s DRM was no longer able to authenticate purchases and locked players out of the majority of the game. Seemingly unaware, Ubisoft continued selling the game until July 2nd, 2021 when it was removed from Steam and the Ubisoft Store. Developer Ubi Milky posted to the game’s Steam Community forums on August 19th, 2021 to explain.

Hello everyone, thank you for checking out this post.

After the retirement of the Might and Magic X Legacy servers on June 1st 2021, we understand that players have come across two issues with the single-player aspects of the game.

Issue 1. Players who own the Deluxe version of the game, are unable to access their DLC, The Falcon and the Unicorn.

Issue 2. Players report that when they meet Lev, the Griffon Rider, the option to Fly to the Elemental Forge is greyed out during Act 1, preventing you from progressing in the story.

Both of these issues have been reported and are currently under investigation. For the time being, the game has been removed from the Steam store, whilst we work to resolve this. We apologise for the inconvenience and thank you for your patience.

Although retail copies of the game were released in Australian and European territories, and while download codes may still be redeemable, all versions of the game are likely unplayable at this time since they would all check into the same authentication servers.

After a decade, a Might & Magic® RPG is back with both the unique core formula and a new set of improved and fine-tuned features. The best RPG of its class! In the wake of the spectacular events in Might & Magic® Heroes® VI, you will play in a party of four adventurers entangled in intrigue and political machinations unfolding in and around Karthal. The city, on the verge of secession, is prey to competing factions vying for its control. Your actions will determine the fate of the city.

Might & Magic® X Legacy is an authentic solo experience in the classic first-person RPG genre. Create and lead your group into an exciting open world and battle mythical powerful creatures while collecting ancient magical treasures!