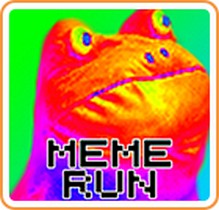 Meme Run was delisted from the Nintendo Wii U eShop on March 3rd, 2015. Artist Carlos Ramirez, who owns the copyright to the “trollface” image that depicted the player character, filed a DMCA takedown request with Nintendo. In a Reddit post on March 4th, 2015, Ramirez explained that the goal was to have the image appropriately credited or removed from the game. Developer Ninja Pig Studios apparently chose not to engage with Ramirez and the game remains delisted as of November 2016.

“Have enough swag to join the illuminati?

Stop reading if you are not a member of the illuminati. This is an encrypted message for illuminati members only:

Introducing Meme Run! The only game in the world where you can go on an infinite running experience while dodging 360 noscopes and dank memes. The longer you stay alive, the more swag points you will earn. Collect illuminati’s and wombo combo’s to gain a multiplier to your swag points. Terrain is randomly generated which makes every experience danker. So m8, what are you waiting for? Tyrone rated the game 8/8 which means it’s not b8 so come play m8.“