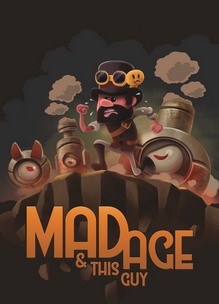 Mad Age & This Guy was delisted on Nintendo Switch and PlayStation 4 between the end of September and early December 2020. Archive.org captures show that the game was still available on Nintendo.com as of September 27th but by December 9th it had been delisted and submitted to the site. The delisting seems to be related to publisher SimFabric who handled the console releases as the original Steam version from developer Atomic Wolf remains available. It is unclear if performance or other certification issues were behind these delistings or if the game’s self-confessed similarities to Bomberman attracted the legal attention of Konami. As of this writing all other releases by Atomic Wolf and SimFabric remain available except for Mad Age.

This is the age of steam. This is the time of unprecedented technology development never seen before. This is the era of science, research, and inventions. However, this world has also another side, the side not everyone aware of. This world is full of mad scientists who plan to use modern technology for the evil purpose – they want to take over the world. But when evil and deception grow in strength, he will appear. He is the secret agent of an elite unit which has to make sure that the newest science inventions do not fall into the wrong hands.

Mad Age & This Guy is a dynamic arcade game that combines many elements from the best classic games you remember and love. You will meet a lot of enemies on your way through the world of caves, ice and villain’s fortress. Be aware of robots driven by most advanced steam technology and dozens of various traps! Get back the stolen plans and make evil lose again!