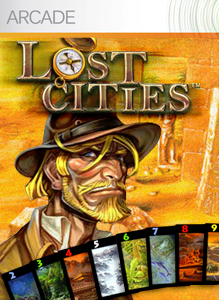 Lost Cities was last confirmed available on Xbox 360 on January 22nd, 2009. By February 20th, 2009, posts on the game’s Xbox.com forums brought the game’s availability to question. Lost Cities was delisted due to Sierra Online losing the license to the Lost Cities card game from Reiner Knizia, as a result of the merger of Vivendi Games and Activision in July 2008. A similar version of Lost Cities is currently available on iTunes as of July 2016. BlueLine Games also released a different, but officially licensed version of the game on Steam on May 19, 2018.

Risk it all on the expeditions of a lifetime in the award-winning card game Lost Cities™ as it comes to life on Xbox LIVE® Arcade. Draw from a pool of cards to amass the most points, play your cards wisely, take chances with your money, and create the best strategy to outwit your opponent on the road to victory.