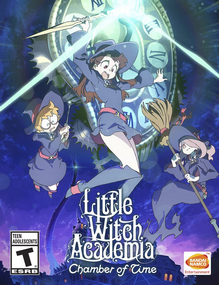 Little Witch Academia: Chamber of Time was relisted on Steam on November 5th, 2019. Gematsu received an email from Bandai NAMCO stating that the Steam title needed an update which required it to be temporarily removed from sale. No specifics about the update were released at the time. The Australian and European versions for PlayStation 4 have yet to return to sale.

Little Witch Academia: Chamber of Time was delisted from Steam on October 31st, 2019 when its price was set to $0.00. The game’s Steam store page gives only the vague explanation that “at the request of the publisher, Little Witch Academia: Chamber of Time is no longer available for sale on Steam”. The game was then delisted from the Australian and European PlayStation Store for PlayStation 4 in early November 2019.

The game was briefly put on sale starting on October 28th leading up to its delisting from Steam. Little Witch Academia: Chamber of Time was likely delisted due to Bandai Namco’s expired licensing from production studio Trigger and the “Little Witch Academia” Production Committee. As of this writing, Steam download codes remain on sale from multiple sources as well as on PlayStation 4 in North America.

“Uncover the mysteries at Luna Nova Academy and experience the magical world of Studio Trigger style Japanese animation. Join Akko and her friends to work as a team – exploring dungeons, casting magical spells and using witchcraft to ultimately discover the seven wonders and solve the mysterious shift in time. Believe in the magic and utilize power and friendship in this side-scrolling action RPG beat ‘em up.“