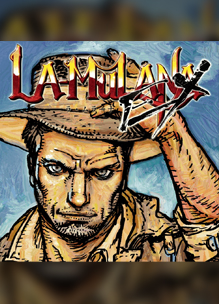 La-Mulana EX was delisted on PlayStation Vita in North America between October 3rd and 13th, and in Australia and Europe between October 16th and 20th, 2020. In a Twitter reply on July 28th, 2020 Rising Star confirmed that their PlayStation releases of La-Mulana EX and Superbeat Xonic would be delisted in “the near future”. As of this update, Superbeat Xonic has yet to be delisted in any region. Expired licensing between the Asian-based developers of each title are likely the cause behind the delistings.

La-Mulana EX is essentially a port of the original game but did add a unique Monster Bestiary and additional gameplay tweaks. As such it is considered a unique release separate from the many other ports of the original.

“A combination of classic 2D platforming, Metroidvania-style adventuring and challenging action gameplay, La-Mulana EX takes you deep into the ancient ruins of La-Mulana on a quest to discover not just valuable treasure, but the secret to life itself!

Fight monsters, uncover clues, collect items and weapons to enhance your abilities, spring traps and battle huge bosses as you try to solve the mystery of La-Mulana. But watch out! No-one who’s entered the ruins before has come out alive… can you succeed where others have failed?“

Thanks to @RvLeshrac for submitting this game to the site