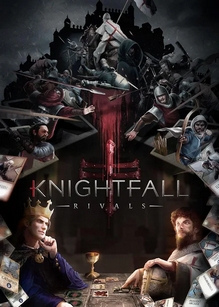 On February 25th, 2018 Behaviour Interactive released the last update to Knightfall: Rivals on PC and announced the end of availability for the game on Steam. The announcement read:

“We are saddened to announce our decision to discontinue support for the Steam platform. As of now, Steam users will no longer be able to download Knightfall on their computers. Current players will continue to have access to the game until we permanently shut it down on May 21st, 2018. Please note, however, that micro-transactions will be disabled during this period.

Despite our decision to close the game’s Steam version, it is possible for you to transfer your Knightfall progress (achievements, cards, etc.) to iOS or Android devices. Should you wish to do so, we invite you to contact our support team as soon as possible and they will gladly assist you in the process.

We’d like to thank each and every one of you for your continued support and constructive feedback. We are grateful to have you onboard and hope to see you all very soon in our mobile version.”

The news was vague but based on bugs reported in the game’s Steam Community forum it may have been delisted as the team was unable to address a growing number of issues. It may also have been delisted so that the team could focus on the mobile versions of the game that may have proven to be more profitable.

“Knightfall: Rivals is a free-to-play, card-collecting battle game. Unlock, collect and upgrade over 100 unique cards. Build your own strategic deck and battle others in full 3D with real-time matchmaking and gameplay. Compete in casual mode or climb the ranks of the Templars on an ever-changing global leaderboard.“

About the Show
Knightfall is a historical fiction drama television series created by Don Handfield and Richard Rayner for the History channel. Filmed in the Czech Republic and Croatia, it premiered on December 6, 2017 in the United States. On August 13, 2018, History renewed the series for a second season. – Wikipedia