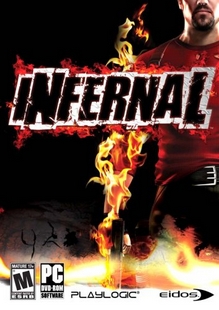 Infernal was delisted from Steam no later than July 2013 based on SteamDB records and Steam Community forum posts. According to the forums, the game was removed because of issues with hardware compatibility. It may also have been delisted due to changes in publishing duties between PlayLogic, Square Enix, and Eidos.

The game was also released on physical media for PC across Europe.

“Join Hell’s forces in this 3rd Person Shooter set in a stunning contemporary world torn apart by Good and Evil. Enter a captivating journey that will send you from mountain hideouts and oil refineries to harbor docks and ancient monastery catacombs. As one of the most graphically advanced PC games, Infernal offers total balls-out gunplay for all Shooter fans.“

State of the Art Technology – Infernal offers real life physics by supporting Ageia PhysX Hardware. Bodies react and crumple accurately and objects recoil to being shot, pushed, or blown up.

Diabolic Supernatural Powers – Use telekinesis, teleportation and invisibility to demonically overcome obstacles and enemies. Heal yourself by absorbing the life energy of your fallen enemies.

Weaponry – Rain hellfire on Earth with military grade weaponry with a bounty of upgrades.

Intense Gameplay – “Balls-out gunplay”, puzzles and computer hacking will immerse you even deeper in the Infernal action!