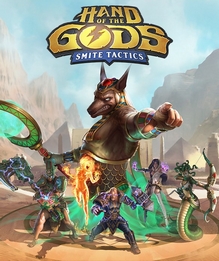 Hand of the Gods: SMITE Tactics was delisted from Steam, PlayStation 4, and Xbox One in August of 2019, likely during the week of August 22nd. On that same day, Hi-Rez Studios announced on Twitter that the game’s servers would be shut down on January 1st, 2020. The game’s PlayStation Store page offered a slightly more robust explanation:

We would like to thank everyone who has played and supported Hand of the Gods since its launch, and we hope that you enjoy the final days of Hand of the Gods. While we announce this news with a heavy heart, we are proud of what we accomplished with Hand of the Gods and we sincerely appreciate all of the players who have enjoyed the game during its lifetime.

Looking at Steam player data, the game rarely had more than 100 daily players over its two-year lifespan. This is more than likely the cause for the game’s retirement.

The Gods are at war. And YOU must lead them to victory.

“Introducing Hand of the Gods, the ultimate strategy game from Hi-Rez Studios. The Gods of SMITE have entered the Battleground of the Gods as collectible cards. Select the Pantheon you will represent, build an army from heroes and creatures of mythology, and lead your army into battle against other players. It’s up to you to command your gods, strategically position your forces, and unleash divine powers to defeat your foes.“