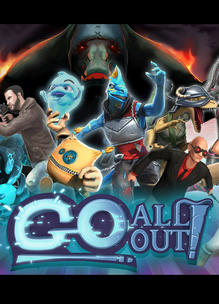 Go All Out! returned to sale on the Nintendo Switch on April 5th, 2020. Based on an exchange with the developer on Twitter, the game had been removed due to a technical certification issue and was delayed in being re-evaluated for release. The original delisting details follow.

Go All Out! was delisted from the Nintendo Switch in mid-February of 2020 if it was available at all. On February 24th Nick Raffa pointed out on Twitter that the game was not available to buy from the eShop on the Nintendo Switch. The game’s price and ‘Buy Digital’ button were displayed on Nintendo.com but by mid-March they were removed.

Neither Blue Sunset Games nor publisher Forever Entertainment have made a statement about the game’s unavailability. It is possible that the Switch release didn’t meet Nintendo’s technical certification or some other software issue required it to be taken offline. Blue Sunset had planned to release the title on PlayStation 4 and Xbox One as well but no more information about these versions has been announced as of this writing.

“A place where all the greatest warriors have been summoned to save the world of Cadread from the mysterious danger that lurks in the shadows. When you’re fighting, be sure to Go All Out! Be the last man standing in this intense and action packed platform fighter. Unique characters, tons of unlockables like skins, equipments or win poses. Different tactics, skills and ways of fighting. It’s not for glory, it’s not for satisfaction, it’s not just to find the strongest warrior of all – true power lies in cooperation and being able to fight together.“

Thanks to Nick Raffa for submitting this game to the site