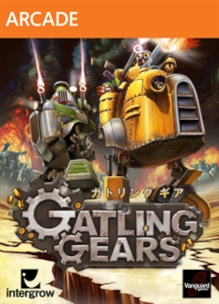 Gatling Gears was last confirmed available on Steam on February 12, 2014 and was delisted by March 18, 2014. The game was then removed from the Xbox Live Marketplace in April 2014, according to reporting from TrueAchievements.com. The game was most likely delisted on PlayStation 3 in North America and Europe and on Origin between these timeframes.

The game was most likely delisted following a terminated publishing agreement between Electronics Arts and Vanguard Games or overall low sales of the game.

Gatling Gears was relisted on Xbox 360 worldwide on July 30, 2014, with publishing duties now being handled by Intergrow. The Steam version would eventually return to sale on December 11, 2014, where it is self-published by Vanguard Games. The European and North American PlayStation 3 versions never returned to sale.

When the Empire begins its reign of destruction in a thirst for natural resources, it’s up to Max Brawley, a retired Gatling Gear pilot, to stop them. Together with his niece and his trusty Gatling Gear unit he must fight his way to the heart of the Empire and eliminate the destruction at its source.