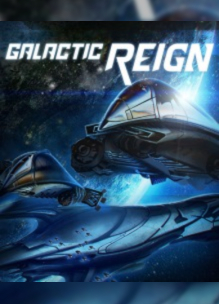 Slant Six Games announced on August 12, 2013 that Galactic Reign would be removed from the Microsoft Store on August 15, 2013, and that the servers would shutdown at the end of December. The game was most likely shut down due to the closure of Slant Six in June 2013.

Today we are announcing that Galactic Reign will no longer be available for download from the Windows Store after August 15thand of the permanent shut down of Galactic Reign and its servers effective December 31, 2013. The forums will remain available until the end of the year, so that players can still communicate and exchange contacts. We will also continue support the Facebook and Twitter channels from now until server closure.

We are proud of the game we created and are thankful to our passionate community.  We hope you have gotten many hours of enjoyment out Galactic Reign and will continue to do so until the end of this year.

A Q&A provided to TrueAchievements the day after follows:

When is Galactic Reign closing?
Galactic Reign will be removed from the Windows store on August 15th and the servers will be shut down on December 31, 2013.

Why is Galactic Reign being shut down?
We continually explore new games and entertainment concepts. Galactic Reign was a great cloud-based video rendering game exploration that we are going to bring to a close.

Will there be any future Galactic Reign games released?
There are no plans to do so at this time.

Galactic Reign would be briefly relisted in November free of charge, and the server shutdown was quietly pushed back to February 28, 2014.

Galactic Reign is a head-to-head game of tactical expansion and conquest. You and your opponent colonize planets, design ships, and build fleets as you fight for domination of the galaxy. Ship design is crucial, as you must predict what their opponent is building and construct ships to counter it. When opposing fleets meet, the battle is rendered on the cloud, showing the result in a stunning cinematic movie.

Galactic Reign is turn based. You and your opponent take your turns whenever you like, and the game advances when you both have submitted your actions. In addition to player vs. player strategy, Galactic Reign features an extensive collection of single player missions that challenge you to use clever ship design to defeat enemy fleets.