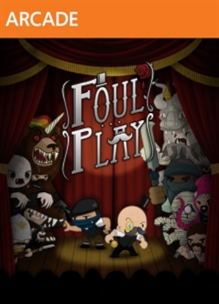 Foul Play was delisted on PlayStation 4 on or before August 9, 2022. This was the date that the game was submitted to the site after being removed from the PlayStation Store. The game was most likely delisted due to an expired publishing agreement between Mediatonic and Devolver Digital, after Mediatonic was acquired by Epic Games on March 2nd, 2022.

Foul Play currently remains available on Steam, PlayStation Vita, and Xbox 360; the latter version being briefly delisted between December 2015 and May 2016 due to the bankruptcy of Mastertonic Group.

Play as the daemon hunter Baron Dashforth in a side-scrolling brawler set ENTIRELY on a theatre stage. Perform shattering takedowns and reversals! Electrify spectators with linked attacks, have a friend join as sidekick Scampwick and use every stage-trick you know to bring the house down! Play out the most spectacular moments of the Baron’s life; improbable beasts, astonishing villainy and, at the heart of it all, the mysterious Foul Play.

Thanks to Asim_25 for submitting this game to the site