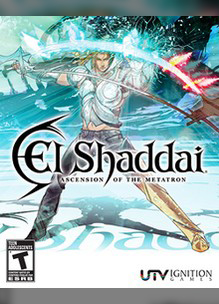 El Shaddai: Ascension of the Metatron was delisted from Xbox 360 in January of 2018 according to reporting from TrueAchievements.com. It was delisted at this time alongside other titles from Ignition Games and may have been removed in a broad sweep of their titles. The game remains available on physical media and a demo can still be downloaded on PlayStation 3.

On December 7th 2020, the original producer of El Shaddai, Sawaki Takeyasu, announced that the game would be ported to the PC. The PC version released on Steam on September 1st, 2021.

Humanity’s future rests in your capable hands in El Shaddai ASCENSION OF THE METATRON, an innovative new action-adventure epic that casts the player in the role of a brave warrior named Enoch. He has been tasked by Heaven to recapture the fallen angels that are wreaking havoc on human civilization, and must ascend a maddening, otherworldly tower and defeat unimaginable horrors along the way. Combining breathtaking visual artistry, a variety of exciting and unique gameplay styles, and a timeless story line inspired by ancient Biblical apocrypha, El Shaddai delivers an experience truly unlike anything that came before it.