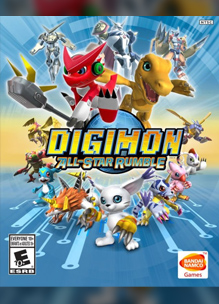 Digimon All-Star Rumble was last confirmed available on Xbox 360 in North America on July 8, 2016, and was removed from the Xbox Marketplace by August 8, 2016. The game was then confirmed delisted on PlayStation 3 no later than September 30th, 2016 when a board on GameFAQs reported that the game was no longer available to buy. The game was later delisted in European regions on Xbox 360 in February of 2018 according to reporting by TrueAchievements.com.

The cause of the delisting is unknown, but may have been a result of expired licensing or a change in Bandai NAMCO’s corporate structure. Both versions of the game remain available on physical media.

Let’s get ready to Digi-Rumble! Jam-packed with an all-star cast from the Digimon Universe, Digimon All-Star Rumble throws down with immersive 3D battle arenas and high-impact, in-your-face fighting action.