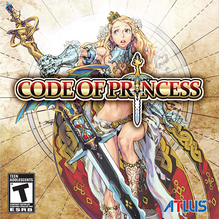 Code of Princess was delisted from the Nintendo 3DS eShop in North America no earlier than March 27th, 2019. This is the latest date that a Google Cache archive shows that the game was available to download. The game had also been delisted in Australia but remained available across Europe. Presumably a short time later, the game was relisted in North America but it is unclear if it ever returned to sale in Australia. Then, on March 25th, 2020, Atlus announced that the game would be delisted again, this time at the end of the month:

As of April 6th, 2020, the game remains available on the European eShop but not on the Australian eShop. It is also still available on Steam where it is published by Degica Games, although this version is missing Atlus’ English localization from the 3DS version.

As versions published by both Atlus and Agatsuma Entertainment have been delisted, the cause may be related to licensing from the developer/publisher duo of Degica Games & Studio Saizensen. In 2018 Nicalis published Code of Princess EX, a cleaned up version of the game for the Nintendo Switch which is still available but also lacks Atlus’ English localization.

Blending fighting gameplay with components from classic arcade side-scrolling beat ’em ups and the character development of an RPG, Code of Princess perfectly combines the two genres, giving hardcore gamers an all new twist on some of their favorite game types. Up to four players can take on challenges cooperatively or battle against one another in competitive play. Both modes are available locally or online via Nintendo Network.