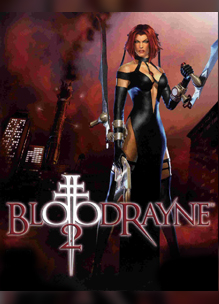 BloodRayne and BloodRayne 2 were delisted from Steam and GOG.com on November 20th, 2020, the same day that Ziggurat released the updated “Terminal Cut” versions of each title. The publisher confirmed that current owners of the original games on Steam and GOG.com would receive the “Terminal Cut” editions for free and that new purchases on GOG.com would also include the original versions. As of November 2020 the digital console releases on PlayStation 3, Xbox 360, and Xbox One remain available. It is uncertain at this time if Ziggurat will update or remove these versions.

BloodRayne is a dhampir, born from the unnatural union of vampire and human. Blessed with the powers of a vampire but cursed with the thirst for blood and a weakness to sunlight, Rayne is challenged with her most personal battle yet as she hunts down her siblings. They have banded together and pledged to carry on their father’s legacy of creating a new era of vampire supremacy where humans are mere cattle. Rayne’s siblings have created ‘The Shroud,’ a mysterious substance that will render the sun’s lethal rays harmless to vampires. Now only BloodRayne stands between an unsuspecting humanity and a horrifying vampire dawn.