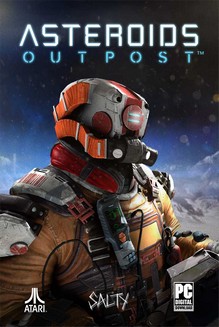 Asteroids: Outpost was delisted from Steam on October 26th, 2016. Judging by community posts from the team and LinkedIn profiles, active development dwindled just months after the game’s release in March of 2015. By May game designer John Harris had left the small dev team leaving Project Lead/Lead Programmer Bill Petro to not only manage the game’s infrastructure but also its direction and its community.

On April 3rd, 2015 Petro replied to a post on the game’s Steam forum explaining that the number of servers had been dialed back to six in “an effort to create more dense groups of players”. By May 15th players began reporting that no servers were available and accounts of the game being unplayable persisted throughout the year. Meanwhile, on June 12th in a news post titled “Switching Gears” the team revealed plans to change the direction of the game based on player activity. More focus on PvP combat and less time spent building bases and hunting for resources was the plan which put the next playable version of the game “a couple months out”.

The team’s final update came nearly a month later on July 7th, 2015 in a hastily written post stating that “the overhaul is coming along and we should have some new assets to show in the coming weeks”. The post expressed appreciation to the game’s community and closed by asking for their patience. This was the last interaction that the Salty Games team had with the community and its vague nature is what led players to hang on month after month.

The last confirmed departure associated with the project was Peter Banks, Executive Producer of Asteroids: Outpost at Atari. According to his LinkedIn profile he left Atari in September of 2016, precipitating the game’s overdue removal from sale on Steam.

“Mankind has expanded its reach into the distant corners of the solar system. Near-space vessels, heavy industry on the moon and thriving colonies on Mars extend humanity’s empire into the great blackness of space. With the earth’s mines nearly spent, industrialists rely on the wealth of the heavens. Our solar system’s massive Asteroid Belt is a mother lode of resources, just waiting to be torn free and shipped home. “The Belt” is the humanity’s newest frontier, as wild and untamed as any that man has faced.

Ambitious prospectors blast off with little more than an Outpost Module and a Mining Tool, to tear the hide off these asteroids and find their fortunes. This bonanza doesn’t come without risks. Mere survival is a daily struggle. Asteroid storms bombard the surface, destroying Outposts, and hostile claim jumpers can appear at any moment. For the brave, there is a fortune to be made. For the foolish – there is only death. Welcome to the new Gold Rush.”

EXTRACT: Shoot down smaller asteroids and harvest their precious components.

EXPAND: Build your base and improve your suit to command an ever greater territory.

EXPLOIT: Forge alliances with other players to protect your claim… Or jump someone else’s.