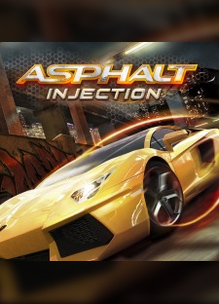 Asphalt: Injection was delisted from the PlayStation Store for PlayStation Vita no later than February 2016. This was the earliest time that the game was reported to have been removed. Asphalt Injection was most likely delisted due to an expired publishing agreement between Gameloft and Ubisoft, or expired licensing deals regarding the cars featured in the game.

Asphalt, the best arcade racing series on portable devices, now comes to the PS Vita with new and exclusive dual-stick, gyroscope and back panel controls. Master 10 different types of events to rule a full-featured Career mode with more than 100 races. Collect over 50 world-class luxury cars and drive them through exotic and beautiful locales in magnificent next-gen graphics. Discover new social features and share your best performances with your friends. Add more fuel to the fire with Asphalt: Injection!