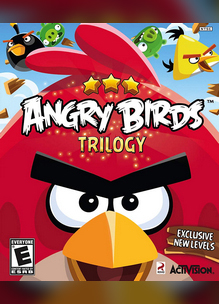 Angry Birds Trilogy was likely delisted between June 2015 and February 2016 on most platforms. Discussion about the availability of the game’s DLC for Xbox 360 began in July 2015 on TrueAchievements.com. On Nintendo.com the last active captures show that the Wii U and 3DS versions were last available between September 2015 and January 2016. Xbox.com pages have so far not been found, and no mention was made on MajorNelson.com of the game’s release.

The game remains available on physical media, and as of this writing, exclusively on PlayStation Vita as a download. In Europe the PSP minis version is also available digitally. The remaining digital versions have been updated to reflect Rovio as the sole publisher.

The survival of the Angry Birds is at stake! Dish out revenge on the greedy pigs that stole the Angry Birds’ eggs. Use the unique destructive powers of each Angry Bird to lay waste to those pesky-pigs’ fortified castles. Angry Birds is a challenging physics-based castle demolition with infinite replay value. Each of the unique levels requires logic, skill, and brute force to crush the Piggies.

Fire your squawking birds into the enemy fortifications. Change your tactics as new birds are added to your arsenal and smash the Piggies defences.

Angry Birds has a whopping number of levels spread out over many different worlds, each one carefully designed to reward the use of clever strategies and lateral thinking.

Even once you’ve completed the game, there’s still more to explore: max out your star-ratings through precision shooting. Hunt throughout the game for the secret Golden Eggs to unlock bonus levels and hidden features.