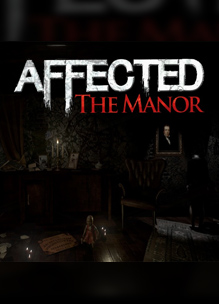 Affected: The Manor was likely delisted on PlayStation 4 on October 28th, 2021 alongside the release of Affected: The Manor – Complete Edition. The Steam release was updated on October 30th, 2021 to also reflect the ‘Complete Edition’ title but its content had changed several times over the years before this. The only version of the game that is available without the ‘Complete Edition’ title is for Oculus VR. However, this version had already been reworked from the original PC release.

Scare your friends and family with AFFECTED: The Manor!

Only the brave may enter!

Experience horror, unlike anything you’ve known before as you try to escape The Manor. Terror lurks around every corner as you venture deeper into the abandoned house and find that the only thing keeping you alive is your sanity. Or lack thereof…

AFFECTED: The Manor now includes two additional gameplay modes! The Gauntlet is a speedrun mode with each player ranked on their time, and how much they screamed! Compete in global leaderboards to set the best time! DARKNESS UPDATE brings a whole new experience as you attempt to work your way through The Manor with only your candle to cast light into the darkness.

Thanks to Ragowit for submitting this game to the site