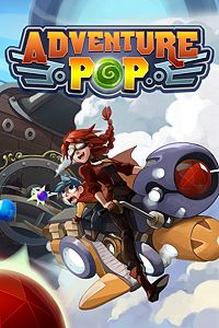 Adventure Pop was delisted on PlayStation 4 and Xbox One during the month of July 2018 according to TrueAchievements.com. As a free-to-play product it may eventually become impossible to acquire even if you had previously downloaded it. As of August 2018 it was still possible to re-download and play the game, although the in-game store (where players were encouraged to buy gems with real money) had been disabled.

Peculiarly, the entire game is watermarked with a ‘GameSparks Preview Mode’ stamp. GameSparks is a full-cycle game development platform that was purchased by Amazon shortly after Adventure Pop was released. They offer a free version of GameSparks for evaluation purposes only which may be one reason Adventure Pop was delisted. Between the seemingly illicit use of GameSparks and disappointing performance of in-game sales, 505 Games may have chosen (or been forced) to pull the game just a year and a half after release.

“Embark on an epic adventure in this all-new, super-explosive bubble shooter! Ready your cannon, aim the bubbles, and fire away to burst through Adventure Pop! A group of adventurers has come together to find new treasures, but not before running into trouble. Help Penelope find her friends but watch out for the pesky pirates! Whether you choose to embark on a single-player journey or engage in a multiplayer bubble battle, Adventure Pop introduces an explosive experience that’s easy to learn yet difficult to master.“