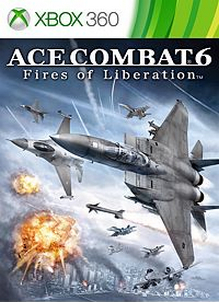 Ace Combat 6: Fires of Liberation was available to download on Xbox One only to those who pre-ordered Ace Combat 7: Skies Unknown before its release on January 18th, 2019. Namco extended the offer after the game’s release, allowing anyone who bought the game through February 18th to also receive a download code.

Earlier, on June 30th, 2016, all of the downloadable content for the Xbox 360 version of the game was removed from sale, most likely due to expired licensing from aircraft manufacturers. An announcement was made on the official Japanese homepage just days ahead of the delisting according to a post on the r/acecombat subreddit.

Witness high definition graphics rendering the world around you into super realistic war zones, made possible only by next generation processing power. Lead not only aerial combat units but also naval and ground combat units to victory. Massive conflicts unfold on a “living battlefield” integrated by the “Dynamic Operation System” where up to six independent aerial, ground, and naval battles can break out at once as allies and enemies clash in real-time.